One of the recent movies that I watched through my Netflix DVD queue includes Everybody’s fine. The movie boasts of stars like Robert De Niro, Kate Beckinsale and Drew Barrymore – some of my favorite actors on screen.

The movie is about a widower Frank (Robert De Niro) who plans to visit his four kids so that he gets to know about their lives like his wife used to. On his visit, he finds that he isn’t welcome by his kids. The kids David (Austin Lyssy), Amy (Kate Beckinsale), Rosy (Drew Barrymore) and Robert (Sam Rockwell) are supposed to be surprised by their dad but each one of them informs the other about their Dad’s “surprise” visit. After trying to visit David, Frank continues his journey around the country so that he can get all of them together like old times.

Like most kids, Frank’s kids want to impress him with the big house, happy family, and high flying careers. What follows is a story about how Frank tries to deduce what is happening in reality by interpreting their actions – to see if everything is really fine.

With a run time of 99 minutes, the movie is short and simple. There are instances where the viewer would have to use their imagination to fill in the holes. The movie also features a song by Paul McCartney  – (I want to) Come Home, which was nominated for the Golden Globes.

I tell you the good news and spare you the bad. Isn’t that what mom used to do for you when we were kids?

Set in South Africa, Cape of Good Hope is a warm film based on the lives of people from different races who work together.

The story begins with Kate (Debbie Brown), caretaker of an animal shelter, who is having an affair with a married man. She works with Sharifa (Quanita Adams), who has been trying to have a child for years now. Jean Calude (Eriq Ebouaney) is a handy man at the shelter and is smitten by Lindwe (Nthati Moshesh). He was a professor at Congo but was forced to take refuge in Cape Town. Morne (Morne Visser), a widowed veterinarian, tries to ask Kate out but is constantly turned off as Kate still has some unresolved issues. The film takes a turn when Lindwe is sexually assaulted by her employer but is wrongly accused of stealing. Does Kate end the affair and give into the charm of Morne? Can Lindwe settle down with Jean Claude? And then comes Sharifa’s problem.

I found it to be a bit slow in the beginning, but the film picked up it’s pace in the second half. Writer/ Director Mark Bamford, has included some comic moments, that makes this a pleasant film to watch.

Life is filled with uncertainties and there is something that brings it all together. Do watch this drama next time!

Love is the force that holds it all together.

I’m a person who is into movies/TV shows that involve cooking. Soul Kitchen is a like a 99 minute reality show that unfolds all the things that can go wrong while owning your restaurant!

Chef Zinos (Adam Bouskous) has been operating a run down restaurant, Soul Kitchen for sometime. He does have a good customer base despite his crappy menu and a dirty kitchen. He is also haunted by tax officials to pay his tax dues. His life gets worse when his girlfriend Lucia (Anna Bederke) moves to Shanghai. His goal is now to find a good chef and a manger to handle Soul Kitchen so that he can move to Shanghai too. In the most unexpected way he hires Chef Shayn (Birol Unel) who turns things around for him with some great menu changes. He now needs a manger to run the kitchen. Can his brother Illias (Moritz Bleibteru), an ex-convict, manage the newly re-vamped Soul Kitchen?

I was reminded of Gordon Ramsay‘s Kitchen Nightmares when I saw how Chef Shayn transforms the restaurant with an elegant menu. As an aspiring restaurant owner, I learnt that simple changes can go a long way in turning your restaurant! The film is not as gripping as Kitchen Nightmares or Hell’s Kitchen, but that’s what makes this different from reality television. The characters look like a bunch of losers with their laid back attitude, something you would not expect from people running a business. But with one determined person, things start looking up and these losers try to create a restaurant with a promising future.

Turkish-German director Fatih Akin (also directed Edge of Heaven) has made a random comic film (oh it’s in German btw) on kitchen adventures. I thought the film could have a better flow of events. I felt he just introduced some random events in between that disturbed the flow of the movie. I’m guessing he was trying to bring out the fact that life is filled with unexpected events. Isn’t that what makes our lives spicy?

Life is what happens to you while your busy making other plans.

I’m at a loss of words after seeing this film: The Stoning of Soraya M. 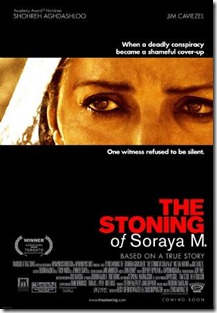 A French-Iranian journalist is stuck in a small village in Iran when his car breaks down. He meets Zahra (Shohreh Aghdashloo, Oscar nominee for Hand and the Fog) who wants to tell him the story about Soraya (Mozhan Marno), her niece. Married to Ali (Navid Negahban) with 4 children, Soraya is a devoted wife and mother. Her husband soon finds a new muse in town and plots to get rid of her.

This is one of those movies that will take a while to forget about. I have to credit the director, Cyrus Nowrasteh for making the movie so real and touching. He has rightly captured the feel and brought out emotions from the characters that make you want to cry.

Stoning of women has been around for a while. You can read about the history of stoning here. The plight of women in these countries is something that we just can’t imagine. If it’s a contest between a man and a woman in the court of law, the woman invariably loses as men don’t have to prove their innocence even if they are guilty.

A brilliant and disturbing flick. Warning: might be too unpleasant for some.

My favorite line is a quote by an Iranian poet, Hafiz that was shown in the beginning :

Don’t act like the hypocrite who can conceal his wiles while loudly quoting the Koran.

8th grade. That’s the time when our character starts shaping up. In whatever timeline we are, some things never change in the 8th grade.There is always going to be that geek whom everyone doesn’t want to mingle with and that pretty girl with whom all the boys want to share a kiss with. Set in the 60’s, That’s what I am, is based on kids from the 8th grade, just before they blossom and reach high school!

Stanley (Alexander Walters) or Big G (G for ginger as he was a redhead), was one of the smartest kids in the school. But he was also one of the biggest geeks hanging out in the “geek corner”. Mr. Simon (Ed Harris), the English teacher, decided to pair up Andy (Chaise Ellison) with Stanley for a school project. Andy was frustrated with this choice and does not know what to do. He had no other option but to get the job done with Stanley. The film revolves around his narration of the happenings in the 8th grade at his school.

The film captures the kids very adeptly as they reach puberty. I think it was a very matured way to show that even the geekiest kid can be what he wants to be by maintaining his/her self respect and dignity. I enjoyed Ed Harris’s subdued characterization of Mr. Simon. I especially loved the part where Mr. Simon won a contest that involved describing world peace in 25 words or less and he just wrote an equation: Human Dignity + Compassion = Peace. The film is very crisp with some great lines by writer/director Michael Pavone.

Do watch this simplistic yet entertaining movie!

Life is about timing, opportunity and choices.

A review of another independent film- Diminished Capacity.

The film is about a Chicago journalist, Cooper (Mathew Broderick) who suffers a loss of memory after a concussion. He goes to meet his ailing uncle Rollie (Alan Alda) on his mothers request. Uncle Rollie suffers from “diminished capacity” and holds on to a baseball card that he thinks is priceless. Cooper meets his old time girlfriend, Charlotte (Virginia Madsen) on his visit who is now separated from her husband and wants to make a move to Chicago to sell her paintings. Uncle Rollie decides that its time to sell his card and all of them travel to Chicago with that in mind.

The movie revolves around the baseball card as different people conspire to steal the card from Uncle Rollie once they find out how much it was worth.

I found the movie too slow paced and felt that it had a weak storyline. A few nice comic moments and some uncle-nephew bonding and that was it. Finally, show down at the end which really did not impress me much.

Overall, a light movie to watch and you can decide if it was too light weighted!

So today I was looking for an Indie thriller/action movie and I found Poolhall Junkies. An interesting movie especially for pool lovers (as the title suggests). 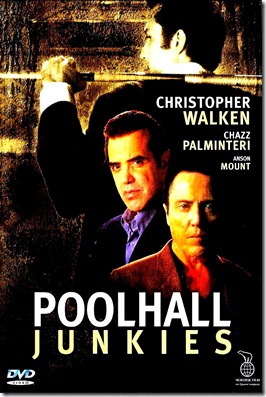 The movie is about a young and talented pool player, Johnny (Mars Callahan– an accomplished pool player in reality) who is adopted by Joe (Chazz Palminteri). Joe uses Johnny in his hustling games till Johnny finds out that Joe was holding back from his dream of becoming a pro. Johnny quits playing and starts living with his girlfriend Tara (Alison Eastwood). He then meets Mike (Christopher Walken– The Deer Hunter, Catch me if you can, to name a few) and wins him over with his talent. But Johnny is forced to quit by Tara until his brother Danny (Michael Rosenbaum) gets into trouble with Joe and Johnny is the only one who can save him. He has to beat a pro Brad (Rick Schroder) to get his revenge against Joe and bring his brother back.

Actor/Writer/Director Mars Callahan has done a good job of not only sketching the character well, but also playing him perfectly. He manages to keep a poker face even when a lot is at stake going to show how adept he is at the game. The film does have a few rough edges. With those amazing shots on the table, I think this is worth a watch!

The film has also has some great soundtracks and quick witted lines which kept me interested till the end. All the pool lovers out there, don’t miss out on this one as you are going to love it!

My rating: 3.5/5 (I added an additional 0.5 after reading this and of course, I like a movie with with some authentic sporting action